I had no problem with this; players drank, took smoke breaks, even chose to partake of substances perhaps more illicit than one might admit in public. My stance simply was this: I don’t want to know about it, so keep it to yourselves and don’t let it get in the way of the raid. In my mind, raiding under the influence was no different than raiding while distracted by the “game on TV”, so I treated the alcoholics of the guild the same as those afflicted with March Madness. 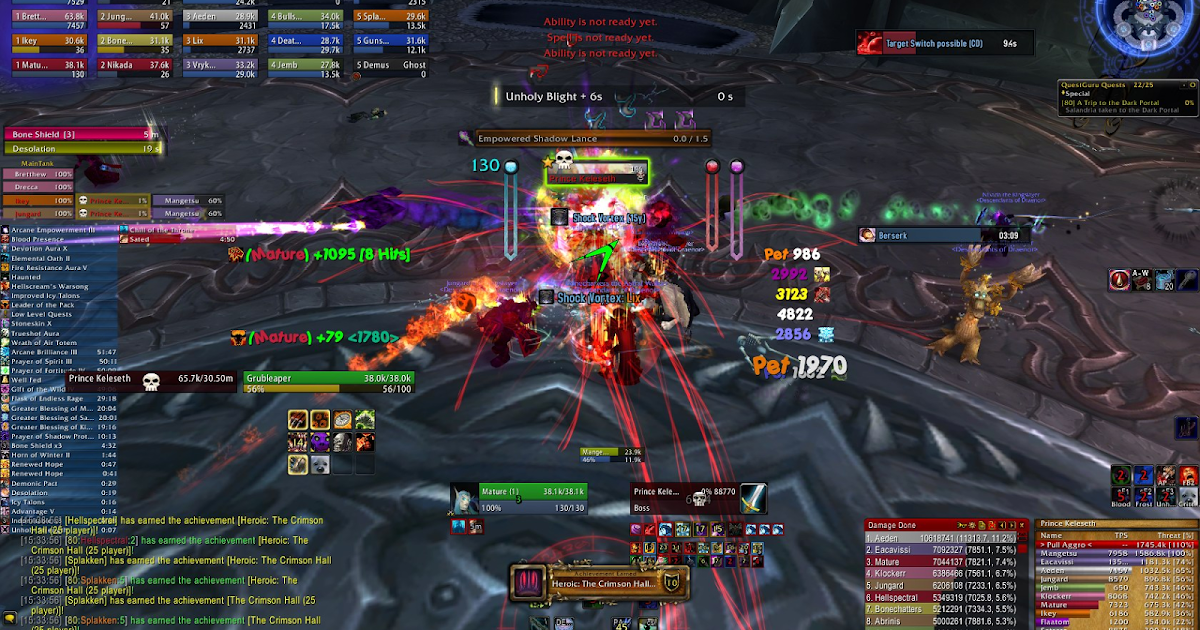 Hanzo crafts Shadowmourne, and deals with a player who can't control his behavior after having a few drinks.

Bullshark, but I find the Freudian slip [?] humorous.

To Neps went Jaina’s Locket, knowing his permanence in the roster exceeded that of any mage.

Isn’t Neps a priest? Or you say mage cause of Jaina?

The requirement of not allowing a single large ooze from casting Unstable Explosion was brutal – forcing more smaller oozes out in the open, kiting them relentlessly to keep from merging upon themselves.

Since you are explaining what the requirement is you should replace the em dash with a colon and then change the second bit to ‘forcing many small oozes out in the open and kiting them relentlessly to keep from merging upon themselves.’

We surprised ourselves by pulling off the server 3rd completion

I feel like once you get past the “server 1st” bit it shouldn’t be formatted in that matter so ‘server’s 3rd completion’ but I see where you are going and I may be splitting hairs.

Bypassing the need to even be vetted, they shot up to the top of the charts – and sunk nearly as much time into the 25-Man as they did into the Alt-25.

This is all one thought no need for the pause/em dash.

so I awarded them an promotion

So as the 50th shard finally made it appearance

Man no mention of Azzinoth to Blain? Burn.

more to the issue that simply anti-social behavior

so I thought it offering it up

Remove the first ‘it’

Isn’t Neps a priest? Or you say mage cause of Jaina?

Mages can teleport groups around. We didn’t have consistent mages. We had a consistent Neps. Therefore, it made the most logical sense to grant him the ability to generate portals to Dalaran.

Could you change it somehow to be more inclusive?

Ooo this is a good part. I’ll be following this closely. From here to there, I’d say Lexxii and and Bullshark were good examples of why to not promote someone too quickly. Unless you are recruiting someone for a high up position specifically, I don’t think promoting someone within just a couple months of joining the guild is a good idea, no matter the amount of time they put in. This always left a bad taste in my mouth and later it got regurgitated. I would have liked to have seen minimum amount of raids attended before promotion can be considered and what not at least in the books to make it less arbitrary.

Just like that asshole rogue who was trying to raid lead from the moment he got in the guild, amirite

You wouldn’t even let me raid because I had logged out with the wrong daggers equipped on my character profile.

And your name was nothing but confetti.

Only one way to solve this, duel outside of Org.

“Hey hey check out these logs from this easy ass dungeon I did with a bunch of scrubs!!! Does this count as proof I can be a raider!!!”

On a more serious note, Bullshark and Lexxii were after my time but from what I have read here and heard from Shawn they were good players and got fast tracked for a reason. I don’t know what the actual timing was but in my mind Avatar was always just throwing someone a bone and nothing more. It lasted what, a week? a month? If they had been promoted to Elite quickly that’s a whole other story (which may have happened too quickly as well but I can’t speak to that either).

You get out what you put in.

It is true, they were exceptionally well played and helped fill key roles where we were lacking. They definitely helped the guild far more than the drama of their fast tracking hurt it.

Future drama that we know now is probably tainting opinions, but at the time the roles they filled were deeply needed. They may have been new recruits, but they both out performed and out classed several of our veterans, and did so while trying to be helpful. Granted, they may have rubbed a few people wrong in the process…

edit Oh, I have to say, even knowing what I know now I would still support shawns actions at this time, it wasn’t until the very end of wotlk and into cata that the problems really started.

It lasted what, a week? a month? If they had been promoted to Elite quickly that’s a whole other story (which may have happened too quickly as well but I can’t speak to that either).

Two weeks at Avatar, at which point they chained immediately into Elite. I left this out of the blog post but it bears mentioning, so I’ve amended that part of the post:

Such acts of dedication in a short time deserved recognition, so I awarded them a promotion to Avatar for their service to Descendants of Draenor. Once the two-week promotion subsided, I fast-tracked them into the rank of Elite.

In retrospect, it was a bit too quickly, but they were demonstrating all the very best traits of the perfect guildy: no drama, superb play, consistent signups without harassment, and the day-to-day contribution throughout the week that was expected of the guild. In my mind, the rush to promote them not only solidified their place in the roster, it fired a warning shot to those who were barely keeping up and wondered why they were being passed over for promotions.

Could you change it somehow to be more inclusive?

To Neps went the Dalaran-porting utility captured inside Jaina’s Locket. His permanence in the roster exceeded that of any mage, so by giving him the ability to port us out at the end of the raid, the gift acted as both a reward for Neps and a practical convenience for the progression team.

You sound mad bro. Want to hug it out?

Get in here, big guy!

Edit: Also cute how you try and say “neither of us are there anymore” but when I disprove it you have to delete the relevant posts and claim I’m linking logs from dungeons. <3

Thank you, Shawn. I like that a lot better.

I moved 13 posts to an existing topic: New Post: The Perfect Loot System

Alright. Time to start the party. I am here…

I moved 2 posts to an existing topic: New Post: The Perfect Loot System

New info has come to light on this particular story, which may warrant an update for clarity. I’m hitting my notes again and need to chat with a few people. If anything turns up, I’ll post here re: the update.