TL;DR: I’ve fallen into a trap within a toxic work environment that has left me exhausted, sleep deprived, physically and emotionally drained…and I can’t leave.

I’m writing this out here so I don’t bore people in Discord that really don’t care. We jump into WoW to play games and forget about our troubles…the last thing we want to do is hear someone ramble on about their own shit. So, I’ll post a link to this and if you care, you can read it, and if not, I get it. Not going to hold it against you.

On Aug 27th, I got the opportunity of a lifetime - to finally get my foot into the door of the executive suite. After 23 years in technology, a company decided to take a risk and invite me behind the curtain and sit with the boys and girls at the grown-up table. I was hired on as Director of Software Development for a company that’s in the “leave management” business. If you work at Target, or one of several hundred other huge name clients, and need to take time of work for any reason (voluntarily or due to illness), we provide the software that handles the leaves, the benefit calculations…all of that.

The VP of Engineering that hired me is a great guy. Had a plan for me on day one. Let me hit the ground running. Knew that I was coming into a bit of shit storm but shielded me from a lot of the trash fire you’re about to become intimately familiar with. Checked in with me daily, “How’s it going, Need anything? Off and running?” Super attentive, very smart guy. Pointed me to the right people. Perhaps most important of all, he trusted me enough to let me do it myself.

The plan was to give me BAU – “Business as usual” work over our main leave management platform, which would free up another Director to focus on innovation/growth: build the cool new shit. I get it. Again, foot in the door, my first time owning a team of 30+ developers across 4-5 teams, as well as inheriting ~70 offshore developers (2 locations in India)…I was completely fine with not getting to direct the cool new shit. I was going to take BAU and execute the shit out of it.

My initial interviews with folks turned up common sentiments. “Unhealthy working conditions.” “Not getting support from leadership.” “Not getting support from other teams.” “Other teams throw things over the fence to us and we have to clean up after them.” “Turnover high.” Not a great thing to hear as a consistent message, but definitely something that is fixable (imho).

(Intermission: I’m typing this at work and just had to talk someone down from crying at their desk)

One of the first things I came to learn is that executives had visibility into the backlog of tickets and work orders (think: bugs and customer requests). Not only did they have visibility into it, they needed weekly updates on what progress was being made to reduce these backlogs. This seemed oddly “in the trench” for executives. When I think of corporate america, I think of people in $1000 suits flying across the US giving talks at conferences about how awesome their product is - not asking for weekly updates of how many “defects did we close this week.”

I also came to learn that the company was in the middle of a code freeze, which seemed odd as we headed into Q4 - the Q where the leave management industry hustles to stand up brand new implementations, to prepare for a “go-live” of Jan 1. Turns out this code freeze was due to an initiative by the parent company to upgrade the company’s infrastructure to AWS (Amazon Web Services). The right thing to do…but definitely the wrong time to do it.

(Intermission 2: Just wrote an email to the CIO preparing her for bad news and not to get angry at one of my project managers and to provide perspective as to why a fix failed to move forward yesterday).

The next thing I came to learn is that work orders had been languishing in the queue for 6+ months with zero movement. Within the first couple of weeks, the Accounts team bombarded my inbox with irate customer emails demanding explanations and solutions. I was happy to stand in front of these firing squads in hope of rebuilding some customer goodwill. My script was pretty straightforward: I’m not going to speak to how things got this way, but I’m committing to make things right.

Oh, how wrong I was.

Because of how red so many clients were, everything was on fire. Have you ever heard the expression “when everything is a priority…nothing is a priority”? This company was living the dream. Every. single. day. New customers were flying off the handle, and priorities changed hour-to-hour. There was no possible we could isolate a list of to-do items and tackle them #1, #2, #3…etc. This is problem-solving 101, as any of you that have raided understand. Brickwalled against a boss? Take a step back. Master one mechanic at a time. Repeat & practice until the boss falls over dead. Pretty straightforward.

Every opportunity I tried force the org into prioritizing a list was met with resistance from Accounts - the same message over and over: “Every customer is important”…which is not helpful from a task execution perspective. Instead of making the teams more efficient, I was forced into email hell mode - “hey what’s the status of x, hey what’s the status of y, hey how much more time before you wrap up z.”

Now, unbeknownst to me, another new hire started the same day as I did. This person was hired at the new Chief Information Officer, and word-on-the-street was that my boss was going to report to this person. Made sense, I wasn’t terribly worried about this.

…until they started getting into the weeds.

Just like I stated above, I’ve traditionally seen executives in the c-suite issue commands from afar - high level direction that is then executed by their reports: vice presidents, directors, managers, developers. They’d check in here and there, make sure their strategy was aligned, and let the troops do their work.

This CIO immediately got into the trench with us. You’re about to re-arrange the org? Stop immediately. You’re interviewing new dev managers? Halt. You’re one step away from pulling the trigger on assigning Shawn his 30+ direct reports? Don’t do any of that. No changes that I don’t personally approve. Strategic. Tactical. Doesn’t matter.

This would become clear pretty quickly.

I sat in on my first “severity event” call during Thanksgiving. It last for five days. All day, every day, from 7:00am until Midnight, I monitored a bridge where developers were scrambling to solve an urgent issue from a very-large-client-that-is-a-health-insurance-company-that-shall-remain-nameless. It was brutal. Calling people late into the night, waking them up, having them jump on the call to help troubleshoot because they were the only person with the knowledge of this particular piece of functionality. And I’m saying the same thing to myself: Why is this the only person in the entire company that can fix this?

In 23 years in technology, I’ve seen some shit. I get corporate firewalls. I get bullshit password policies. I understand why corporate america has to put this stuff into place. But I’ve never worked anywhere before where Gmail is blocked. I’ve seen colleagues that work for the Federal Gov. that have more lenient access policies than this company.

So as you might expect, the types of tools that software developers rely on to quickly solve problems aren’t an option. Slack is blocked. Developers don’t have administrator access to their own workstations. Everything is managing through strict governance, in the form of tickets. You need that patch deployed? Open a ticket. You need to install Visual Studio? Open a ticket. A customer is on fire and you need immediate access to production to troubleshoot? Sorry, not allowed. Gonna have to open a super special kind of ticket (that doesn’t really work).

This fosters of a culture of fear and an absence of trust. Developers want to be empowered to make their own decisions in solving problems. Yet they’re continually prevented from doing so. The red tape makes things incorrigible (make sure you say it like Jim Carrey in The Mask), and cements this “siloed” mentality into the minds of all the teams – which is why teams continually respond with “Oh, that’s not my job, bat that over to the XYZ team.” It is literally ticketing that is the cause for this fractured company culture.

Did I mention the horrendous commute? It’s 45 minutes each way, and if I have any chance in hell of getting ahead of my day, I need to be by 7:30am to start fielding meetings with the offshore teams (7:30am to me is 7:00pm tomorrow for them). So, I’m up at 6:00am every day, out the door by 6:30 - and if traffic behaves, I get a few minutes to myself before the meetings fire up.

(Intermission 3: Calling a hotel to reserve a lobby for my teams to physically leave the office and actually plan work for the future so they aren’t constantly interrupted)

And yeah, the day isn’t over at 5:00…or 5:30…I’m often here until 6:00 or later, cleaning up the mess of the day, sending out a million updates to the tune of “STILL IN PROGRESS!” which is a colossal waste of time and energy. So if I get out of here by 6, I’m home (if lucky!) by 7pm…maybe I get some time to eat (but preferably drink!!) and honestly, I won’t know what my frame of mind will be, day to day – and that includes whether or not I’ll be functional to raid within the hour…I’ll most certainly pass out from exhaustion before the raid ends (I’m consistently falling asleep around 10-10:30pm now).

In the last week of November, my boss, the VP of Engineering, quit.

There’s been no replacement as of yet.

The CIO that loves to dive down into the trench? I report to her, now.

Same title. Same pay. Still don’t have an org reporting to me (just a random bunch of contractors). But nearly all the responsibilities of a VP of engineering have fallen to me. Severity events happen every day. Defects are constantly flowing in. I can barely keep up. I can’t hire (nobody wants to work here). People are leaving in droves. People are crying at their desks. Clients are red every day. Everything is on fire. This is hell. I am in hell.

…but I can’t quit. Need the health insurance! Julie needs a lot of medical attention. I can’t just walk away! Besides…wasn’t this what I wanted all along? A chance to prove to naysayers that I can do it? I can do this.

I ask you: what exactly is it am I trying to do?

Enjoy a photo of my calendar! 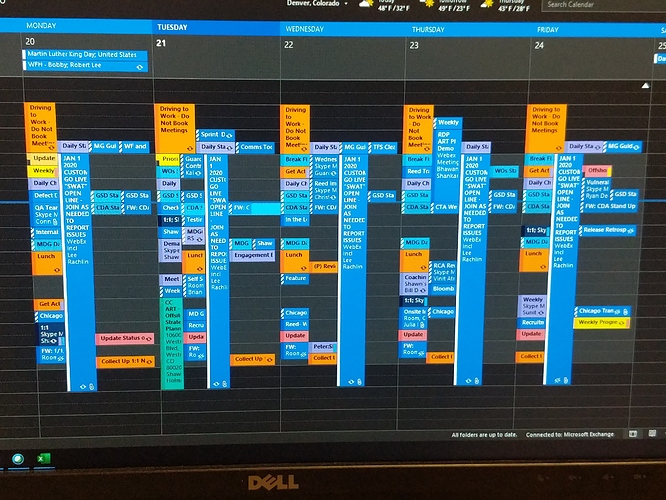 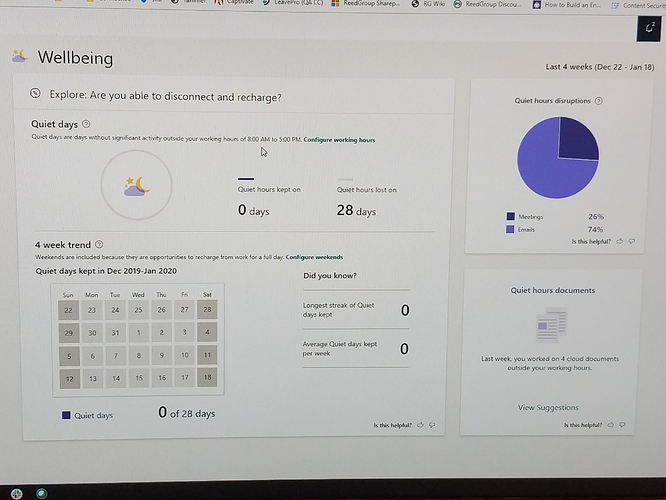