Outside of their raid schedule, members of Herp Derp were a little less easy to pin down. They kept to themselves, rarely spoke up in guild chat. Drecca did most of the talking, often issuing blanket statements that any player worth their salt would question. All topics became controversial, with Drecca leaning uncomfortably away from fact, his answers laced with prophetic subjectivity. These rage-inducing platitudes seemed crafted specifically to crawl under my skin. 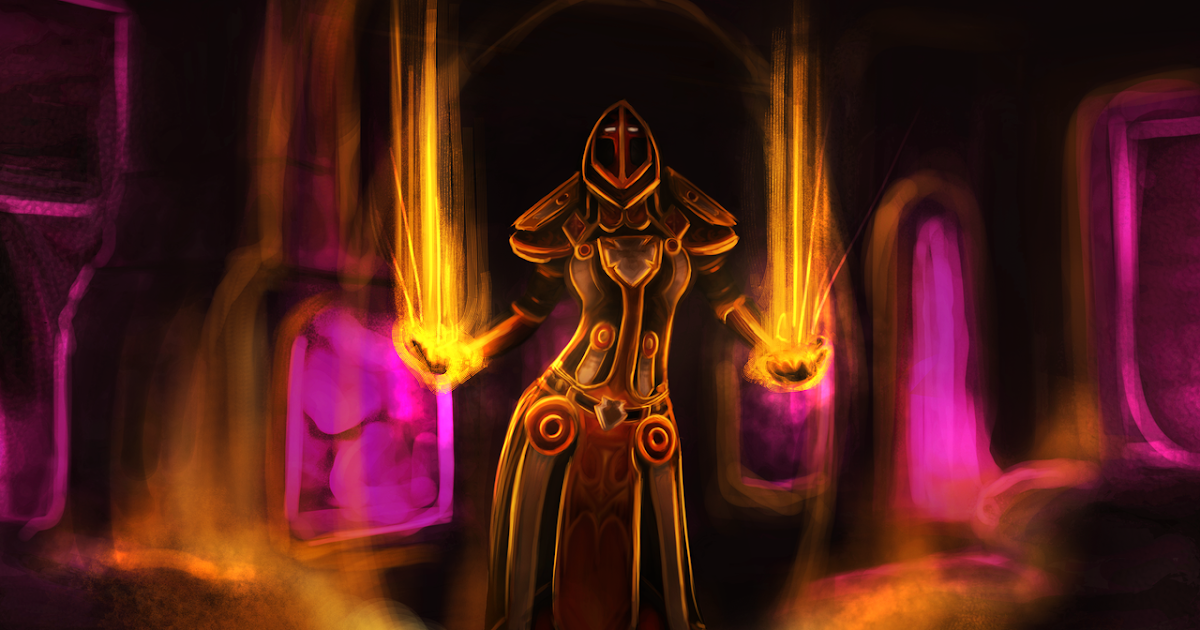 As Drecca's defiance grows, an incident involving Ben sets the stage for the final act of DoD.

someone’s accountable for it.

Sounds better as “someone should be accountable for it.”

Since you are speaking of “They” the Tacticians as a group, this should be “enforce”. “They enforces” isn’t correct.

Less is more: “get the guild to congratulate them on their raid content success”

I can’t really find a specific instance that fits this exactly, only that when talking about a specific group, whether or not company is abbreviated, it should be capitalized (just like Herp Derp is, essentially I treat this as a substitution Herp Derp = Drecca and Co.)

Same goes for this.

There’s no mention of any time frame in this new blog post so the reader doesn’t have anything to reference, three weeks earlier than what?

They kept to themselves, rarely spoke up in guild chat.

I’d replace the comma here with “and”

Many factors did, but that Drecca was present was the only significant difference that separated a night of kills from weeks of stonewalling.

Many factors did what? Is this a continuation of the thought from the previous sentence? Many factors played a significant role? This isn’t quite clear. I’m also not sure what the second part of the sentence is going for “but that Drecca was presetn was the only significant difference that separated a night of kills from weeks of stonewalling.” Are ou trying to point out that he was the determining factor? Later on in the same paragraph you point out that it was two tanks vs three tanks.

moving from two tanks to three, a nightmarish separation of interrupt groups into separate vent channels

They couldn’t separate themselves into different vent channels; a smaller group inherits more individual responsibility, so pulling them apart was a self-defeating endeavor.

Change the semicolon here to a colon and there’s no need for a comma after “responsibility”.

offer up an apology for his abhorrent behavior. And we’d do the dance, as we had so many times before.

Since you have the extended pause from the em dash earlier in this sentence there shouldn’t be a need to separate these two sentences. Just remove the period and lowercase “And”

Many factors did what?

I rephrased both this and the following paragraph; I get how it was confusing. The intent with this (and the following) paragraph is to paint more clarity around the tuning/difficulty of the 25-Man, to help the reader understand why we thought one more was more difficult than the other:

I believe the ambiguity in the first version came from a perception that I was trying to paint Drecca the player as the reason for the success that night, when in fact, it was Drecca the paladin that was the reason – that his class played much more of a factor that we should have expected it to, and I lump this in with the other examples to paint that 10 vs 25 difficulty.

Hours of practice, ending in wipes,

No need for the first comma after “practice”.

defeating the boss in one pull

Sounds better as “the boss being defeated in one pull” just because there really isn’t a direct actor in the sentence although it is implied.

a testament to the tuning of the boss.

Usually I associate “testament” with something sound or positive, and in this case wouldn’t the fact that you cannot bring the players you would like to be a negative? How about “a flaw in the tuning of the boss.”

Provided those changes, I think it is good now.

Rolled them up, except for the ‘testament’ bit, but did notice in reviewing it I had them mixed up. “A blood death knight’s kit was no match for a prot paladin’s” which is how it should have read.

The 25-man required three tanks. It was non-negotiable.

Given that current WoD Mythic tuning allows for this kind of thing in encounters, do you think it gives an appropriate amount of satisfaction for the super hardcore guilds that clear content by solving these kinds of puzzles? In other words, is ‘bring the player not the class’ not the best way to go for the highest tier?

Note, I’m more referring to the next line that mentions one of the tanks HAD to be a paladin.

@Mrcarnival ‘Bring the player not the class’ was an appeal to the mainstream. A hardcore raiding guild bent on server/world firsts is going to stop at nothing to make that happen, even if it means loading up on druids. In the case of a hardcore raiding guild, the phrase has no value whatsoever.

So, when considering whom it does apply to, in the context of this claim (applied to 25-Man/10-Man Normals in Cataclysm), raids should have been expected to mix/match their roles to classes with much more freedom than in the past.

In reality, Blizzard’s idealism was overshadowed by its agenda to UBER balance the difficulty between 10 and 25, a strategy doomed from the moment they tried to say “10=25”. Three well-geared, decently played Blood Death Knights were unable to pull off Nefarian in 25-Man Normal, and the night-and-day difference of switching in a Paladin made it perfectly clear that ‘Bring the player not the class’ wasn’t entirely honest.

@hanzo I do not disagree with you at all, and you’ve stated it much better than most of the endless forum posts about that. Admittedly I was so burned out on raiding during Cataclysm I spent just about the entire expac grinding solo for The Insane, and never even stepped into LFR, much less raided on a schedule.

What I’m most curious about is your thoughts about the way Blizzard is designing current Mythic raiding, given that they’ve stated they’re allowed to tune it knowing full well that no players other than the most hardcore dedicated groups will finish that content for its rewards (and therefore theoretically CAN ask guilds to specifically gear up, say, a ret pally or a frost mage for a specific encounter mechanic).

Is it similar enough to the “good ol’ days” when defeating bosses was satisfying but without the unbearable headaches that came from the earlier, more hardcore design mentality? Or have we just played for too long and no matter what, the luster is gone, no matter what they come up with…?

I ask you this from the positions of both a huge fan of your writing, and as a 16+ year veteran game designer.

I’m pro-Mythic. I think it was The Right Decision™ for a number of reasons. Mythic clearly defines the most challenging path, a path most commonly associated with a list of “unspeakable” demands: min/maxing, classes over players, ridiculous hours, a cut-throat approach to recruitment. Server/world-first guilds consider these non-negotiable. It became a particular area of contention during the 10/25 years of Wrath and Tournament of Champions exacerbated the notion that elite guilds must run both the 10 and 25 to complement their gear, in order to have the best chance possible at success.

In nearly every case, these demands are ridiculous and self-imposed.

I make no secret that I modeled my guild leadership after one of the original vanilla top-end guild/raid leaders, Gurgthock of Elitist Jerks. It was my perception that he ran a very professional ship, favoring analysis over brute force. One of the first things I read was this passage on a “Recruitment Closed” post:

If you are looking to raid seven days a week, six hours a day, you’ll probably find a better fit elsewhere. I think most guilds raid more than they need to, and I prefer to emphasize quality over quantity of time spent. The average age in EJ is probably in the neighborhood of 23 or 24, with more people tending towards the working professional end of the spectrum than the student end. I work too many hours each week to waste time screwing around when it comes to progression, and a lot of people are in that same boat. As a raid leader, I will be respectful and responsible in my use of your time, because I don’t assume that players have unlimited quantities of it.

In other posts, Gurg clearly states that anything more than three days a week is sheer overkill. If you’re over that, you’re doing it wrong. I share his belief.

We typically hear the whining and crying about “feeling forced to run extra raids for gear”, but the truly smart guilds know the truth: it isn’t necessary. The same holds true for making the conscious decision to level up a frost mage or a ret pally, just to close that gap. At least, it was in our experience, and that was from TBC all the way up until Nefarian in Cataclysm (Vanilla gets a pass, as it demanded some pretty crazy shit that would be unconscionable today).

There’s one key difference between TBC/Wrath/Mythic (today), and what Cataclysm did differently (read: wrong), and that was tuning the most challenging, most difficult path to NORMALS. When we swapped out a DK tank for a pally tank, that was 25-Man NORMAL Nefarian. No matter your particular guild leadership style, whether it is focused on consuming any/all content to put you in the best place possible, or to take a more reserved, analytical approach to defeating the toughest bosses…

…neither of those top-end strategies should’ve been necessary on a normal mode.

Cata-era Heroics, sure, of course! In a heartbeat. If I was discussing Sinestra, this wouldn’t even be an issue. But overtuning…which is something Blizzard loves to do (scaling back later) needed more thought and care, and they were unwilling to budge, because it would mean undermining their Cataclysm agenda of ensuring 10s/25s were as close to each other in difficulty as possible.