My plan with the forum post was for it to enforce one of the guild’s new edicts: I won’t tell you what we need, you tell me what you enjoy playing. The intent of this new ideal was to produce a raid of passionate players, as opposed to a disjointed mix of folks halfheartedly playing a role they were forced into…just to see content. Guildies kept their eye on the Raid Slot Template, saw which classes/roles were filling out, and where the shortages became most apparent. This new information, I wagered, could lead them to introspect and make a more informed decision about cutting over to class they enjoyed playing…that we also just happened to lack.

Beercow was the first player to take advantage of this. 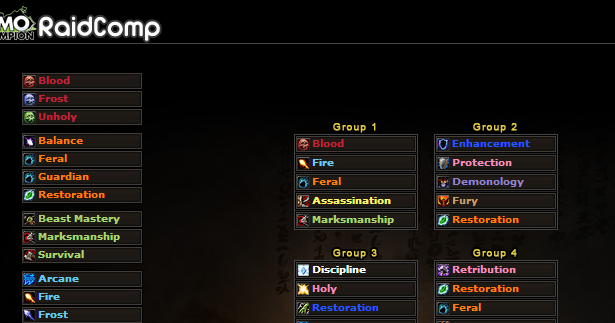 Hanzo reflects on the benefits of increased class homogenization in WotLK by recounting the story of veteran raider returning to the guild, only to find his first choice role completely filled.

And it typical Ghostcrawler form, he took to the forums and defended Blizzard’s new mantra of “bring the player, not the class”. Greg argued on behalf of Blizzard that players shouldn’t need to kick their best friends to the curb in order to bring that one dwarf priest for Fear Ward.

Could you change the order of he and Greg? While it’s implied that Ghostcrawler is Greg through the use of both names so close together, having it Greg then He shows people unfamiliar with him his name, further educating them.

Edit: can you work this image in there somewhere? http://www.blogcdn.com/wow.joystiq.com/media/2010/10/bubblehearthbeachball.jpg

And it typical Ghostcrawler form

You can thank Windfury for reason shamans

co. should be capital

I think state should be stat

life-blood to lifeblood
totem-kiting to totem kiting
easy-mode to easy mode
first-hand to firsthand
self-applied could go either way
class-specific could go either way
gap-closer How about since we have a Lightning Overload of hyphens (shaman puns!) already you change this to "The Windfury totem buff helped close the gap"
popped-up to popped up
surge-of-interest to are you kidding me? get those hyphens outta there

he faithfully made his weekly penance into Molten Core.

Since penance is a noun, one cannot make it into a place. Change ‘into’ to ‘in’

those few individuals whom were consistent

‘Those few individuals’ are the subject so ‘whom’ should be changed to ‘who’.

But, it wasn’t for a new guild, he promised, just the dreaded “real life”, and assured me he would be back if he could make it work.

So. Many. Pauses. In. This. Sentence. How about: But he promised it wasn’t for a new guild, just the dreaded “real life” and he would be back if he could make it work.

So. Many. Pauses. In. This. Sentence.

ahh this reminds me of my days on the HWL grind. Hail to the HWL Lollipop!

are you kidding me? get those hyphens outta there

Honestly, I get going sometimes and then it’s HARD TO STOP IT’S LIKE AN ADDICTION OMG.

Could you change the order of he and Greg?

Done. Dunno about that image, though. A+ for effort!

I would recommend you reconsider the closing statement. While it serves as a cliff-hanger, it’s not a great one. Your “blindside”, as the name suggests, is one in which you WILL NEVER SEE ANYTHING COMING EVER. That being said, I don’t see how there can be grades of difficulty with seeing things approaching on your blindside. I can imagine something approaching could be worse than others: a stuffed teddy bear vs.Terry Tate, Office Linebacker. Seeing them approach should be, by definition, equally difficult because you’ll never see them coming either way.