The lovable nerd brought down a rain of fire on to the whelps, and within seconds, World of Warcraft began to lock up.

“Whoa whoa whoa! What the shit?”

“Calm down, relax. It’s probably a bunch of outdated add-ons. Just deal with it.”

The view inside Onyxia’s lair became a slideshow as my game client choked and sputtered. Ten seconds passed by before things began to smooth back out. I glanced at the raid. Six people were offline; 24% of the raid. Years earlier, our first kill boasted a total of seventeen players dead when Ony hit the floor – a percentage somewhat closer to 42%. 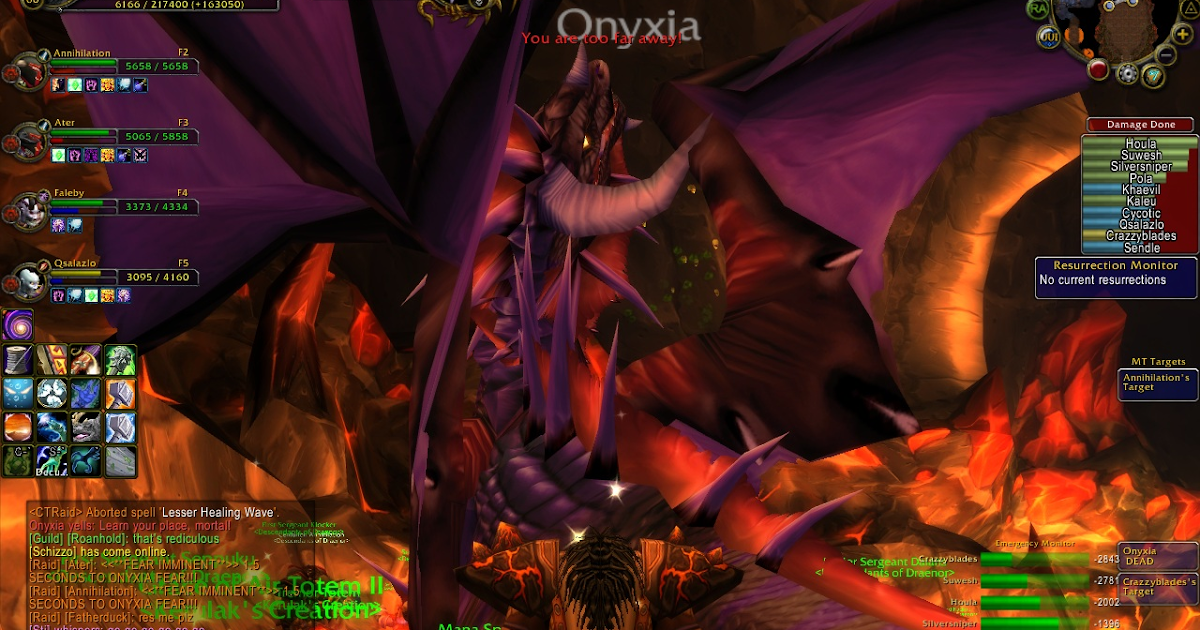 The guild returns to defeat an old flame, and Omaric offers a counter proposal to Hanzo about raid leadership.

It could only work they held a completely unified front;

Missing an “if” in there.

Even with two 25s a week players still lacked gear, but displayed no similar deficiency of interest to raid.

The side-effect of splitting our time equally between ToGC and Ulduar was that my normally consistent raid signups began to skew heavily one direction or the other.

“…in one direction or the other.”

The curious experiment unfolded, leaving the amoeba in the petri dish unchecked, no boundaries, watching what destinations their primal instincts would drive them towards.

I see what you are getting at but this hurts my brain to read (and hurt my brain even more to try and keep intact yet clean up).
“A curious experiment unfolded: an amoeba was put in a Petri dish to see the result of such an organism being left to its own devices, unchecked.”
This could probably changed a few other different ways but you may want to take a second look at it overall.

If I was lucky.

If you were lucky, what? Is this part of the sentence preceding or after? Doesn’t seem to fit.

Human nature is what it is…it wants what it wants.

Ok Emily Dickenson…how bout just saying it is human nature to be selfish cuz the actual quote (the heart wants what the heart wants) is sappy as all hell.

Bird? How about “beast”.

grabbed the bird by the proverbial horns.

What’s going on here did I miss something? What’s with calling Ony a bird? And ‘bird by the horns’?

The ol’ bird deserved better than this.

I’ll process these edits shortly, but for the record, I referred to all internet dragons we slews as “birds”. Shows how everyone ignored me. shrug.

I think the reader will get it if I’m consistent.

I see what you are getting at but this hurts my brain to read (and hurt my brain even more to try and keep intact yet clean up).

Concur. I had to make several passes on this guy alone. Changed to:

The curious experiment unfolded; amoeba left alone in the petri dish, their primal instincts driving them to destinations unknown.

If you were lucky, what? Is this part of the sentence preceding or after? Doesn’t seem to fit.

If I didn’t explicitly point it out to them, they were none the wiser…If I was lucky.

…if I wasn’t lucky…then their intentions weren’t as innocent:

A conspiracy theorist mighty hypothesize that they were putting on a front, faking their dedication while manipulating the system to suit their own needs.

…is the claim I am making here. I assume this is completely unclear now and I need to rephrase this paragraph?

Yeah it sounds a bit like you were lucky to have people running around in their oblivious greed driven loot haze; I’m not seeing why that would be a good thing as being unlucky would then mean you have players who aren’t being greedy?

My feeling was if people were greedy and truthful about it, that was easy to handle (so I was lucky). When they put on a show to mask their intentions, I had to decipher it, which took effort…and therefore, I was unlucky.

Yup got it, I think my intention was just the “If I was lucky bit” was out there in the open and looked unconnected so it was a little hard to interpret.