Oceanic realms were routinely snubbed by the Aussies and New Zealanders, as they were hosted out of a data center in South East Asia; an unfortunate but necessary decision. Thanks to a single Australian ISP diverting its traffic to San Diego before relaying it to the rest of the world, hosting dedicated servers where there be kangaroos wasn’t going to provide a better experience. So those players had two choices: Oceanic via South East Asia…or North America. Occasionally, they’d cross our path. 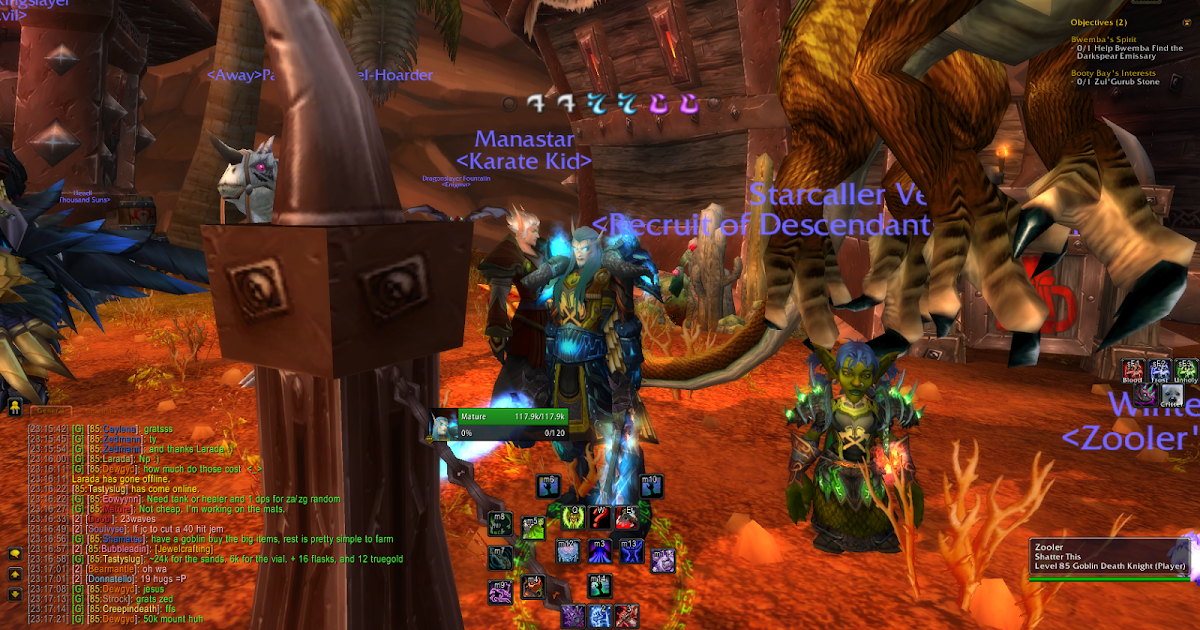 No pictures!!! The one of Vexx is broken, don’t even see spots for others. EDIT Reloaded and the Vexx pic came up.

I leaned on old faithful, WoW Lemmings, as a means of finding faces, but there was little ripe for picking.

This reads funny, could just be me though.

He was adequately geared, and spoke intelligently raiding and mechanics.

about raiding and mechanics?

Just a factual thing but as mentioned by the Aussie in the comments, those servers were hosted out of the California DC back then, not South East Asia.

I just know you like to be as accurate as possible

Just a factual thing but as mentioned by the Aussie in the comments, those servers were hosted out of the California DC back then, not South East Asia.

Unless something changed between Oct. of 2010 and the launch of the dedicated Australian hosts in 2014, they would still have been in South East Asia by the the timeline in the blog (~May 2011).

But if he can provide something beyond simply “I’m saying this because it is true,” I’m happy to see that material and update the post, if need be.

They were localized as North American (English) – that didn’t mean they were hosted locally in North America. Two completely different terms.

Reading the article you linked

“So we have a big data centre in South East Asia, so it makes sense for us to grow that data centre out to Australia, in terms of putting Oceanic servers there. That actually would make the experience worse for Oceanic players. But it is something we’re talking about - I met with our network guys and our IT guys as early as two weeks ago to talk about Australia and to talk about what we can do.”

That doesn’t say they are out there, that says it would make sense to put them there but since traffic is routed from Australia to San Diago first, going back to South East Asia would be worse.

In line with 10th anniversary celebrations, Blizzard has shocked Australian fans with the announcement of local servers set to go live October 28.

A decade ago, Australian players first joined the game via North American servers. Later, Blizzard launched Oceanic servers set to follow Australian time zones, but the servers themselves were still located on the west coast of North America.

Awful, awful phrasing in their response, I might add – which, at initial glance, read like they had been put there. The “makes sense” portion of the response, as well as a lack of “but” at the start of the second sentence gave me the impression they had done it, and if they had not done it, it would have made the experience worse.

So, good eye on the reading. I’ll update.

Terrible quote for sure

Thanks for the kind words

Shrivelled vs shriveled, I’ve always seen it with one “l” but w/e. The important part is, what is “shriveled people economy” is that a thing?

Any inquiry for help would only paint gigantic targets around us.

did not end with Dewy

Typo or shortening and already short name for a nickname?

she kicked the doors open into DoD

“she kicked open the doors to DoD”

to gross each other other out.

Remove one instance of “other”

The things I heard discussed that day no human should have to endure.
Dalans may have “seen things”, but reader, I say to you on this day:
I’ve heard things.

a disconnection, which were infrequent.

Even though you are speaking about potentially multiple instances, I think you have to match the case here so it should be “which was infrequent.”

what is “shriveled people economy” is that a thing?

It is when I bloody well say it is!

Typo or shortening and already short name for a nickname?