Omaric’s position was structured so he couldn’t take advantage of the guild, even if he wanted to. Now, after seeing Bheer’s story from a different angle, I had renewed faith that Omaric wanted the best for DoD.

Until I found out about his alt. 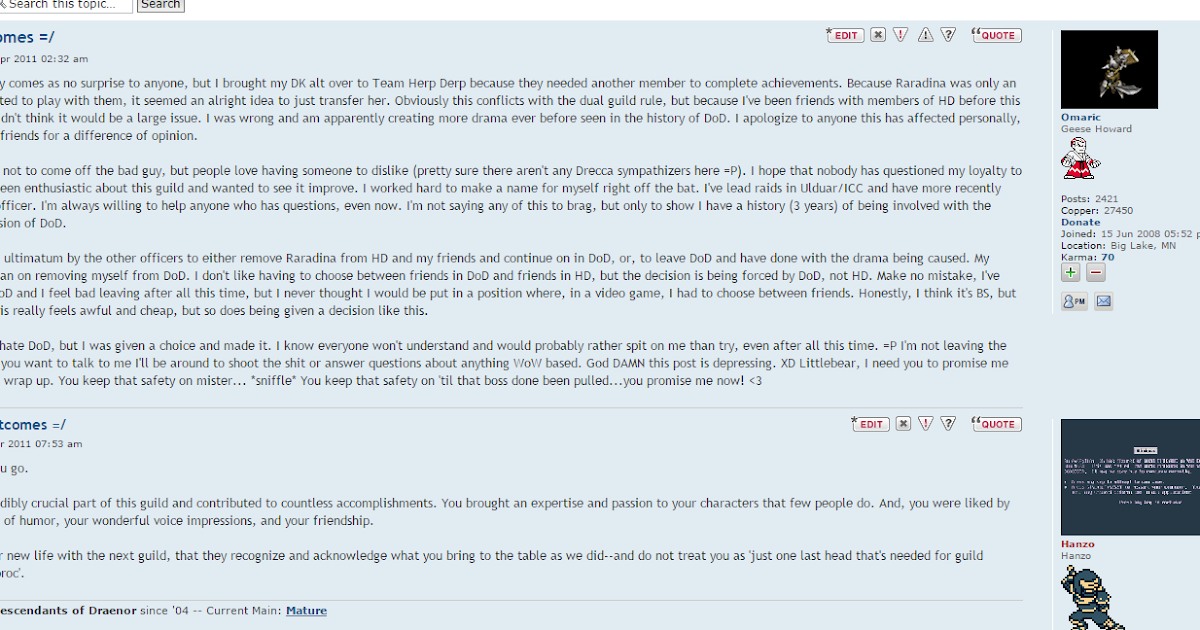 A final exit marks the end of DoD's third exodus.

Those who remained could focus undeterred on the road ahead, hoping to get significant work done in 25-Man heroics. Preferably, before the release of Firelands.

This should be one whole sentence as the second is a fragment referencing the subject/idea in the first sentence. “Those who remained could focus undeterred on the road ahead, hoping to get significant work done in 25-Man heroics…preferably, before the release of Firelands.”

A taste enough to grant him perspective. So I thought.

Recent events, however, caused me to reconsider the loot collusion story. And the major players involved.

So were going with the hanging effect for this post eh? This needs to be one sentence as the second part is a fragment w/o the first. Comma or semicolon as you see fit as far as the pause goes when you read it in your head.

just another person in his life telling him his place was in DoD was in jeopardy.

Remove the first “was” here.

His spot was never in jeopardy, but the horse blinders of his bullying
years narrowed his focus to the most important issue: removing threats
to exclusion.

The dysfunctional relationship between Crasian and Bheer made more sense every moment I reconsidered the story.

Formatting, I’m guessing there should be a paragraph break between these two sentences however on the blog page itself, it isn’t there.

causing Bheer to grow so averse to thought of Crasian

“so averse to the thought of”

he’d have been unable to even even read a forum private message from the guy.

Hurts my brain a bit. “…he wouldn’t even consider reading a forum private message from the guy.”

Perhaps even, to be willing to embellish a collusion story and pin it on Crasian.