I Solemnly Swear That I Am Up to No Good

But this balancing mechanism went both ways. If a player entered the zone and their faction was already at full strength, a warning popped up: Warning! Battle in Progress! You will be Teleported Out in 10 Seconds! Lake Wintergrasp not only kept the weak from being overwhelmed, it kept the strong from getting stronger…

…and it was this mechanism that brought us here today, waiting to exploit it, by any means possible. 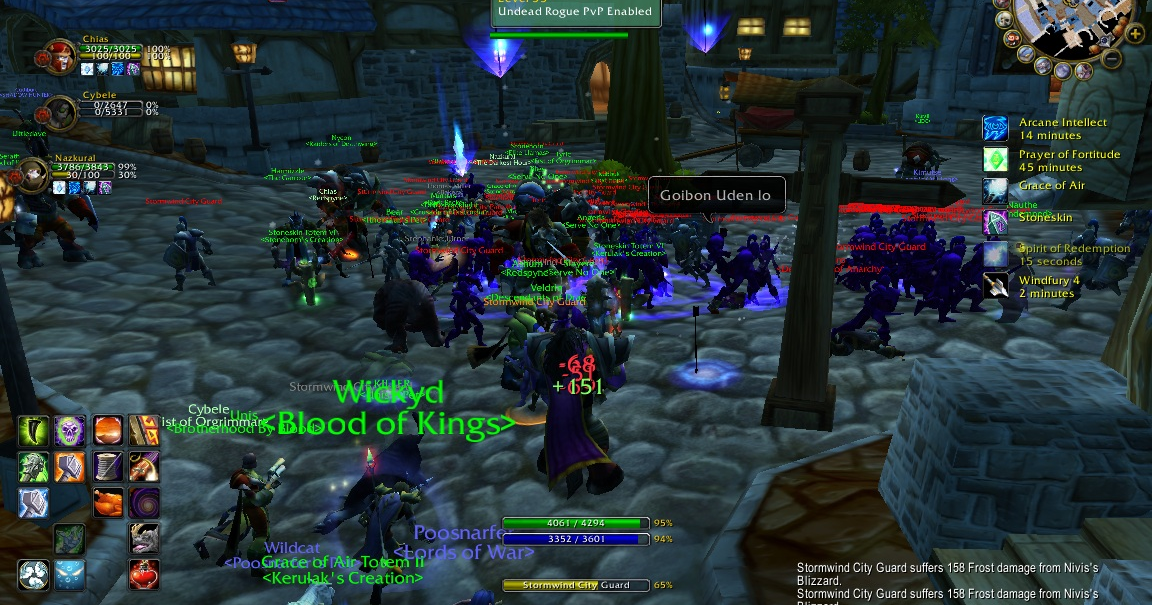 Hanzo joins in the exploitation of Tol Barad to save himself from the misery of PvP.

But I had good reason to jam myself into the crowd. Buried in the dark recesses of their subconscious, all of these players did.

Swap these two sentences to keep similar ideas grouped together. You loathed being there, so did the other players THEN you had a good reason, never say no to free stuff.

A fleeting moment on that bridge a shot at salvation

Add “was” after “bridge”

battles erupted out of thin area

In those days, Alterac Valley was considerably epic;

I’d go with a colon here because you are giving an example immediately after this statement.

Alterac Valley had structure, defined points of contention; it required tactics and coordination to successfully end a game…with PvP rewards waiting for those who did.

“Alterac Valley had structure with defined points of contention. It required tactics and coordination to successfully end a game…with PvP rewards waiting for those who did.”

If there was only a way to capture both the intensity and incentives of Alterac Valley in the outdoor world, Blizzard thought, the resulting world PvP could be elevated to something much more.

“If only there was a way to capture the intensity and incentives of Alterac Valley and instill them in the outdoor world, Blizzard thought, the resulting PvP could be elevated to something much more.”

“About the time that the members of Descendants of Draenor were taking…” otherwise it sounds awkward with the entity group of DoD and the was/were usage.

With few explicit rewards for controlling said points, Eastern Plaguelands, Silithus, Hellfire Penninsula, and Zangarmarsh all went ignored by only a few short months after being introduced.

in the final weeks to Cataclysm.

over the course Wrath’s life

Fighting in Wintergrasp was also loads of fun; participation was varied and unique.

“Fighting in Wintergrasp was also loads of fun due to varied and unique tasks.”

Attack the towers, crippling the defense.

“Attack towers which would cripple defenses.”

Gain control of the workshops, to man a vehicle and lay siege to the fortress.

“Take control of workshops to gain vehicles that lay siege to the fortress.”

Double-down behind the castle walls, shutting down any attempts to infiltrate the base.

Individual players on a lopsides team

watching a single player lay siege to an entire warfront

Tol Barad was the culmination of all that Blizzard had learned in their quest to polish world PvP. An island off the coast of Khaz Modan provided to the setting of a former stronghold, now converted to a prison. Baradin Hold, like the Vault of Archavon, granted secret raid bosses to the faction capable of capturing the island. Additionally, those in control would gain additional daily quests, which they could use to stockpile a special currency for Tol Barad-specific rewards.

Let’s not forget that Honor points themselves were on the table, good for purchasing anything of a PvP nature.

Tol Barad was popular. It was new while Wintergrasp was fresh in our minds. and it was easy to engage. one headed to the zone via portal, arriving in a waiting area (complete with vendors), which led them to a path up a hill, across a bridge, and onto the main island itself – where the battle unfolded. And, just like Wintergrasp, if one side was deficient, they gained strength. Conversely, attempting to join when your faction dominated the roster ended with a 10-second warning, alerting you to the impending ejection you were about to receive.We understood the ejection but Today, we intended to beat it. I can’t say with certainty that all of us understood the ramifications. At the very least, I can promise you that I did.

Word traveled quickly of this exploit, a feat anyone could pull off with little effort. All it took was a player on the inside, currently waging war on the island, to hop into Vent with a player waiting on the bridge. As the final seconds of the win ticked away, the signal was given to the man on the outside. In turn, he called it out to those waiting on the bridge. The hundred of us burst forward, marching across the bridge onto the island of Tol Barad, an alert quickly popping up. You will be teleported out in 10 seconds.

Word traveled quickly of the exploit. All that was required was a player on the inside to count down the final moments of the battle over Vent. As the final seconds ticked away those waiting on the boundary burst forward as the 10 second ejection warning popped up.It counted down, Six. Five. Four. Another message flashed up on our screens.

The Horde has claimed Tol Barad!

Anyone who claimed this wasn’t an exploit is a liar. Everything about it screamed violation of the rules. of world PvP, of Tol Barad, and of WoW. Yet for some strange reason, Blizzard hadn’t officially gone on the record to condemn the behavior. Exactly why this was is unknown but I have a hunch it had to do with it being the last week of December, a time usually reserved for people being at home, spending time with their families on the holidays, rather than rushing back to work to make official statements about why something so plainly obvious is considered breaking the rules. but the problem is: the absence of clarification acts like a “Get Out of Jail Free” card to many. The first half of my WoW career as guild leader to DoD can attest to this. If I didn’t explicitly say it was a rule…someone…somewhere…would pitch me this line:

Whatever helps you sleep at night.

Not everyone in DoD participated. Goldenrod, for one, felt uncomfortable about the entire situation, choosing to step away from the bridge entirely. But there were others bearing the Descendants of Draenor tag that joined the well-orchestrated march across the bridge…I was one of them. I did it knowing full well that, eventually, something was going to happen. I accepted the responsibility of that decision, but never once tried to claim that it wasn’t an exploit. Most likely, Blizzard would return from Christmas holidays, fix the exploit, and all the honor / Tol Barad tokens earned as a result would be rolled back. Blizzard closed up the exploit on January 6th, but never actually rolled back the honor accrued during its presence. That was surprising; a bullet dodged. I would have accepted the loss if it had been stripped from me; I have a feeling few others shared my point of view.

…but it didn’t make them right.

My reasons are my own, but for you, dear reader, I’m happy to share. I exploited this bug with other players because PvP didn’t really matter to me in the grand scheme of things so PvP is an afterthought, an appetizer, a side-dish that plays a very small roll in a much larger feast. it was easy for me to justify breaking the rules (whether unofficial or not). because of the role PvP played in my WoW career: practically nil. Therein lies the rub, for this is a point of contention that permeates my entire experience in World of Warcraft. When players so easily defend their actions by saying “Calm down nerd, it’s just a game,” they give themselves a free pass to misbehave. to step outside of norms that, in the real world, might give them pause before kicking an old man down a flight of stairs.I was fully cognizant of my bad decision on the bridge, but I can say with confidence that a great number of those players didn’t give it a second thought – they justified their actions to themselves because nothing was in writing. One thing, however, was very clear about the Tol Barad exploit, regardless which direction each player’s moral compass happened to point…

…if players can take the easy way out, they will.

Additions/changes are in bold and removals stricken out. The last few paragraphs have sentiments that are repeated multiple times and extraneous or information that isn’t really pertinent so I tried to clean up as much of that as possible.

Huge help on this, many thanks. I took nearly all edits suggested here and rolled them up. The point of Goldenrod being one of the few who refused stays in, as this comes up later on.

I wanted to do a re-read once the edits were in so:

Tol Barad was popular. It was new; it was accessible. And, just like
Wintergrasp, if one side was deficient, they gained strength.
Conversely, attempting to join when your faction dominated the roster
ended with a 10-second warning, alerting you to the impending ejection
you were about to receive.

We understood the ejection, but I can’t say with certainty that all of
us understood the ramifications of attempting to side-step it. At the
very least, I can promise you that I did.

It probably wasn’t clear in my response but you could combine these paragraphs.

Blizzard hadn’t officially gone on the record to condemn the behavior.

Actually sounds better without “the” after “on”

If I didn’t explicitly say it was a rule…someone…somewhere…would pitch me this line:

Formatting. There is an extra line return after “say it was a[return]”

I wouldn’t make this a contraction, YMMV.

All looks good, that cleaned up nicely.

Rolled these up as well.