In reality, Dark Transformation’s uptime was awful, and micromanaging the timing to increase it left wide gaps in unspent runes, downgrading both Mature’s effectiveness and my enjoyment. It was difficult to get right on a dummy, never mind the chaos of a Heroic: Magmaw attempt. And as for Dark Simulacrum, it ended up a nerfed, barely-realized fantasy. A million spells in World of Warcraft, and death knights ended up being able to copy…about four.

Maybe I’m exaggerating. But it felt like four. And that didn’t feel very fun. 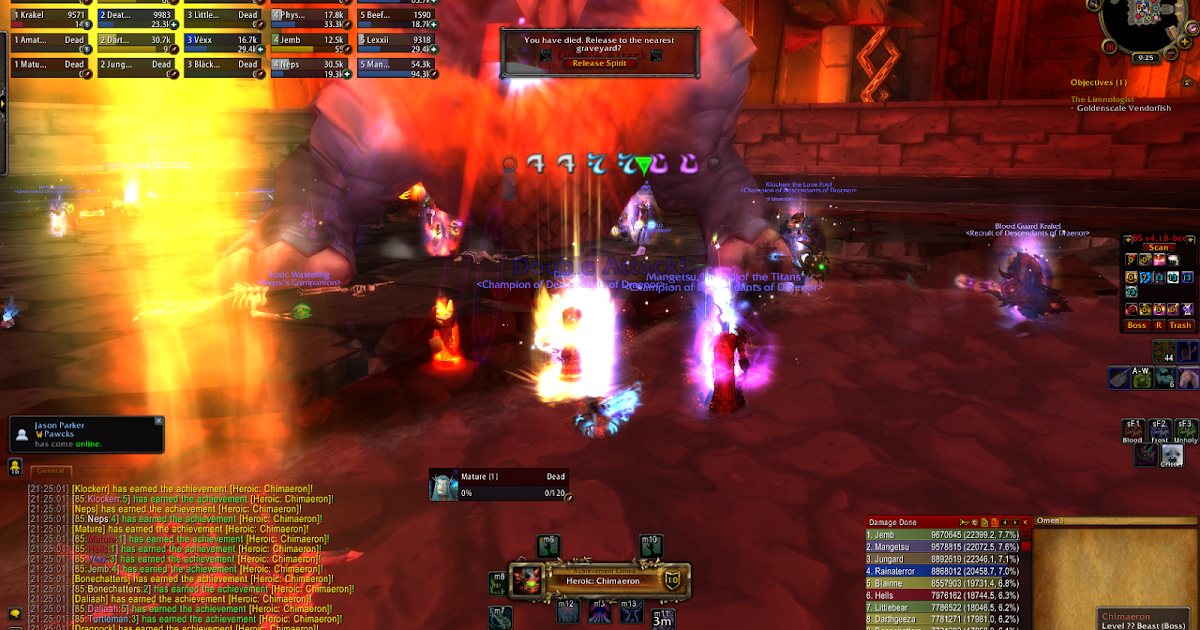 Hanzo struggles with the changes to Unholy death knights.

During one of my trips business trips

in the midst of reliving story

we secured to tanks

I’m guessing this should be “two” instead of “to”?

and while I’m not about to sit here and debate his difficulty (hint: he’s not)

I know you are saying he’s not difficult, and probably most everyone reading this blog knows that as well but since the word “difficulty” can mean easy or hard it would be better if the extra info said “(hint: he’s a pushover)” or what have you. Difficulty =/= difficult in other words. Also I’m assuming your parallel to Patchwerk is more meaning melee can stand and deliver, not for the ease of the encounter (because Patch was hard AF back in the day).

I make no secret about looking forward

The whole paragraph is past tense so change “make” to “made”

our play style was essential

The claim was that our play style was essential “rune locked”; that we only had enough globals to burn each rune as it cooled down

Since you are defining a term here, I would go with a colon rather than a semi colon.

fixing us into a locked rotation that was too penalizing if we strayed from the rotation.

Fixing sounds off, how about “forcing”? Also since it is clear you are speaking about the locked rotation issue you can dump “from the rotation” at the end of this sentence so it is less redundant.

because they really wasn’t a rotation

Change “they” to “there”

And clunky and felt Mature was perpetually tapping his foot and looking at watch, waiting for the right rune to reset.

Looks like a trim gone wrong? “It was clunky and I felt Mature was…”

The clunkiness of the new rune system was almost immediately felt in early Cataclysm beta. To offset this, Blizzard gave us a choice of spec’ing into either Runic Corruption or Runic Empowerment. The latter really was intended for Frost, as the style was already very proc-like. That meant I was stuck with Runic Corruption, or what I like to call
"Guitar Hero in Hell".

Blizzard’s heart was in the right place. Runes cooling down sequentially introduced a bit of sluggishness to the death knight play that no player nor developer could ignore. In order to speed that back up, Blizzard gave us Runic Corruption, a talent that had a small chance to proc when we spent Runic Power. When it proc’d, rune regeneration would double for three seconds.

So in these two paragraphs it reads like you are introducing Runic Corruption twice. This is easily fixed by changing the second paragraph to:

“Runic Corruption was a talent that had a small chance to proc when we spent Runic Power. When it proc’d, rune regeneration would double for three seconds.This was Blizzard’s wholehearted attempt to resolve the sluggishness of the death knight that was introduced with runes cooling down sequentially.”

Makes it flow a bit better.

With Runic Corruption proc’ing, I expected to get Mature back into his groove, ramp up the speed and eventually hit a new momentum in which I was spending runic power, procing Runic Corrupting, lighting up the runway with runes as they poured down my screen in double time, and repeating the process.

s the music of the death knight wing

I think we covered the class not being a proper noun in a previous blog post but would this not be capital as it is essentially a named place within the game, even if unofficial?